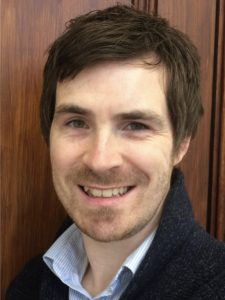 Dermot is a Reader in Theoretical Physics and a research group leader at Queen’s University Belfast. He is principal investigator of the European Research Council grant “ANTI-ATOM” (2019-2024). See below for a brief CV.

I obtained my PhD 15 December 2011. I have had ~ 10 months of career breaks, plus significant disruption to research activities from March 2020 due to increased childcare and caring responsibilities as a result of COVID impact.

Lecturing and other academic duties

I hold a Postgraduate Certificate in Higher Education Teaching and am a Fellow of the UK Higher Education Academy. In 2020 I was awarded a 2020 QUB Teaching award for the development of innovative technologies and an effective connected learning environment.

Most recently I lecture ~200 undergraduates in mathematics/applied mathematics and theoretical physics, covering mathematical methods including an introduction to calculus in 3D: see Lightboard Lectures on my YouTube channel

Dermot was born and raised in the Cavehill area of north Belfast. He attended Belfast Royal Academy grammar school, where numerous teachers inspired him in mathematics and the sciences. In his youth he captained Star of the Sea football club, about which Andrew Lloyd Weber wrote a musical! He married his “high-school sweetheart” and they now have three children, whom he adores and spends every second possible with.