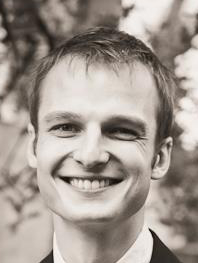 Andrew Brown is a lecturer in theoretical physics at QUB. Andrew was awarded his PhD in 2013 and appointed immediately to the post of lecturer. His research has focused mainly on the extension and application of time-dependent R-matrix (TDRM) theory to the description of high-harmonic generation (HHG) in general multi-electron atoms. He has adapted both the TDRM codes and, more recently, the RMT codes to this end. He has extended the RMT codes to provide theoretical support to state-of-the-art experimental research using attosecond transient absorption spectroscopy. In 2016 he has developed new capability in the RMT code to address the process of XUV-initiated HHG and pioneered a new technique for high-harmonic spectroscopy of inner valence electrons.

Andrew ported both the TDRM and RMT codes to HECToR and later ARCHER, and more recently, was co-I on a PRACE preparatory-access project, porting and optimising RMT on the IBM Bluegene/Q machine FERMI at CINECA in Italy.

Andrew was invited to address delegates at the 2013 International Conference on Photonic, Electronic and Atomic Collisions in Lanzhou China. He showcased his work at the SET for Britain poster competition at the Houses of Parliament (March 2014), and in May 2014 was an invited speaker at the international workshop Perspectives of ultrafast physics – light-induced dynamics in atoms and molecules at the Centre for Theoretical Free Electron Laser Science in Hamburg. In 2015, he gave an invited seminar to the Bothe Colloquium at the Max Planck Institute in Heidelberg, and in 2016 he was an invited speaker at the Ultrafast electron dynamics in molecules XLIC workshop in Edinburgh.

Recent advances in laser technology have facilitated the experimental analysis of atomic structure and electron dynamics in undprecedented detail. The process of harmonic generation in particular has been central to these advances both as a basis for ultrashort and high-energy laser pulses and as a tool for elucidating ultrafast dynamics. Typically, now, we are interested in dynamics which occur on the attosecond scale (1 as = 10-18 s), which is the fundamental time scale of electronic motion in the atom.

Theoretical methods capable of describing attosecond scale electronic motion typically adopt a classical approach where an electron is driven by a laser field in the net potential of the residual ion. However, methods pioneered at QUB allow us to address the interaction of all the electrons in an atomic system. It is these multielectron interactions which mediate ultrafast dynamics and thus it is imperative to address them accurately.

Time-dependent R-matrix (TDRM) theory, and the associated TDRM and RMT (R-matrix incorporating time dependence) codes, are among the only methods in the world capable of describing multielectron and multichannel effects in ultrafast laser atom interactions. For my PhD thesis I used the TDRM method to address harmonic generation– the production of high frequency laser light via stimulated subcycle electron motion– and uncovered a series of multielectron aspects to the process. For instance, interference bewteen electrons competing in the harmonic generation process can lead to an increase in the harmonic yield at particular frequencies.

I have since extended these studies of ultrafast processes to experimentally relevant (mid-IR) wavelengths. Now my research focuses on extracting experimental observables from the detailed ab-initio calculations performed with RMT. To this end I have investigated several cutting-edge experimental schemes using the RMT approach, including attosecond transient absorption spectroscopy, strong-field rescattering and, most recently, XUV initiated high harmonic generation.